Spotlight on one of our partners

All over the world the giants of fast food are spreading their standardized food.Except in Haute-Ariège, native valley of the Mac'arel. The burger symbol of theresistance of the breeders is first of all a stroke of humor: it is an expression thatwe often use around here; but it's also a nice way to talk about a quality productand make it known. 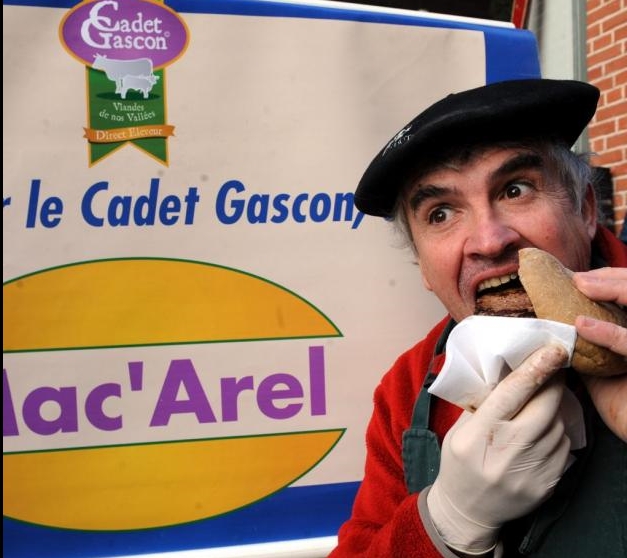 In Ariège, everyone knows the Mac’arel, the burger that made headlines in thelocal press. A beret screwed on his head, escorted by his inseparable grill,Philippe LACUBE came to challenge in Toulouse, on the place du Capitole, thegiant of the international fast-food. A punch operation to encourage consumersto "eat the Mac'Arel and not the Mac from elsewhere!". The cry of the local foodfacing the symbol of the globalization of taste.You eat the Mac’arel with your fingers: under the crust of a round baker’s bread,the aroma of Gascon Beef hamburger just out of the plancha irresistibly invadesyour nostrils. Bread, steak, a slice of cheese and that's it: the breeders; burgerreturns to the origins of taste, that of an exceptional meat, the Gascon beef ofthe Pyrenees, icon of the mountains of Ariège.

To find out where you can enjoy a Mac’arel, follow the news of pastoral fairs andmountain-related events where the team of “Maison LACUBE”, the farmrestaurant that the family has opened in Les Cabannes, sets their plancha. Orjoin one of the summer “burger-parties” on the farm where Jason, the secondgeneration of LACUBE, will delight you with his Mac’arel to the sound of Pyreneansongs, in straw and hay!

EDF Hydro Aude-Ariège, a committed partner of the PICaPICA and the Montcalm Marathon.

In Ariège and more particularly in the Vicdessos, everyone is aware of the importance of the industrial heritage of the valley and the key role played by hydroelectricity. Hydroelectric heritage is recognized as an integral part of the territory's identity and history.

The turbines of these power plants use the water stored by the large dams of Majou, l’Escales, Gnioure, Izourt and Soulcem. 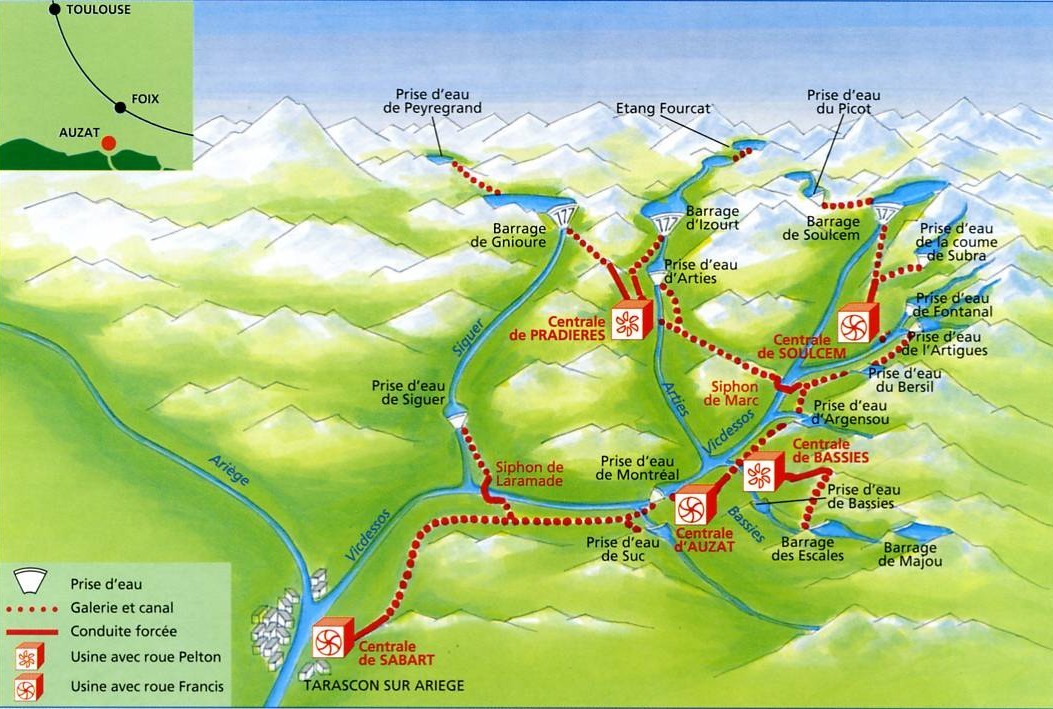 Dams and hydroelectric plants in the Vicdessos Valley.

A large-scale project has started in November 2018 in the Vicdessos Valley : EDF Hydraulique Aude-Ariège is replacing the penstocks of the Sabart hydroelectric power plant. This project is part of the modernization program for the hydropower facilities of the EDF group, the leading producer of renewable energy in France. Ariège is a department with a strong hydraulic presence: 17 power stations produce annually 1400 GWh of electricity of renewable origin, 4 times the consumption of the inhabitants of the department. The works, which will last 3 years, were organized in consultation with local environmental associations.

The development of the local economic base is a major challenge for the EDF group. To carry out this project, EDF Hydraulique Aude-Ariège used the services of regional companies. A consultation work with the environmental associations to take into account the environmental issues (fish preservation, protection of rare species ...) was carried out before the start of the works, before any realization of the new facilities.

On the website dedicated to the Sabart project in the Vicdessos www.edf-sabart.fr, you will find photos, films and all the answers to the questions that you will surely ask each time you hike along a dam or hydropower plant.

Hydropower generation represents an average of 10% of the electricity produced by EDF in France annually. Respectful of the environment, this low carbon energy contributes to the energy transition of the territory and the fight against global warming.

Ariège is a territory that benefits from a significant natural heritage, EDF is a partner when it comes to support sustainable tourism or to highlight the environment and the landscape and natural heritage.

It is therefore with a real conviction and a sharing of environmental and human values, that we join in all the events of the Montcalm Marathon and the PICaPICA.

PICaPICA’ s route goes through the Izourt, Bassiès and Soulcem dams and EDF Hydro thanks the organization for showcasing these hydropower structures. 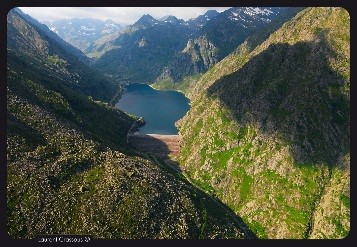 EDF hydraulicians are very attached to their mountains. During their work they regularly walk the trails that lead to the dams and it is natural that they have formed a team of volunteers present among the hundreds of volunteers of the Montcalm Marathon. 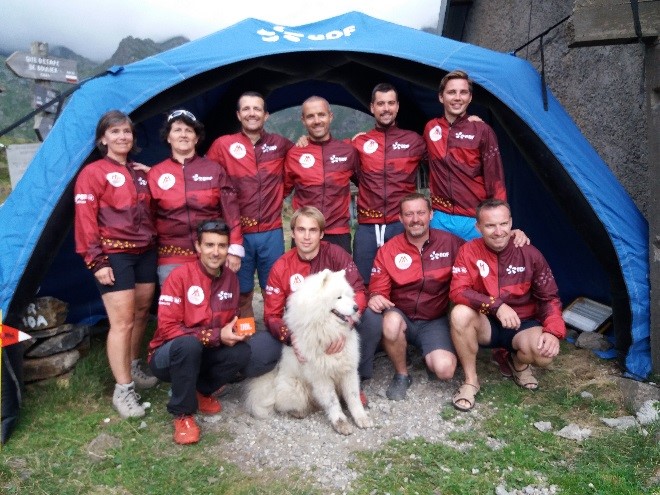 Supply point at the Izourt Dam 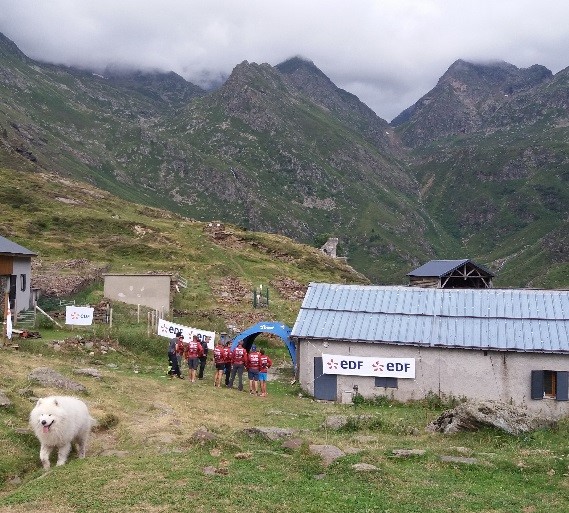 The partnership between EDF Hydro Aude-Ariège and the Montcalm events is not only about logistical and financial support (certainly necessary), it is also and above all a story of men and women of the valley, who share with the Montcalm organizers, volunteers and runners the same values, who like the effort in the mountain and above all, the respect for the mountain.

Being present as a hydroelectric operator responsible for renewable energy in the Ariège valleys, working with all the actors of the department in areas as impacting and complementary as the environment, the water resource and its various uses, the economic development, makes us proud.

Proud to be for a long time deeply rooted in our territory and today inseparable from it. 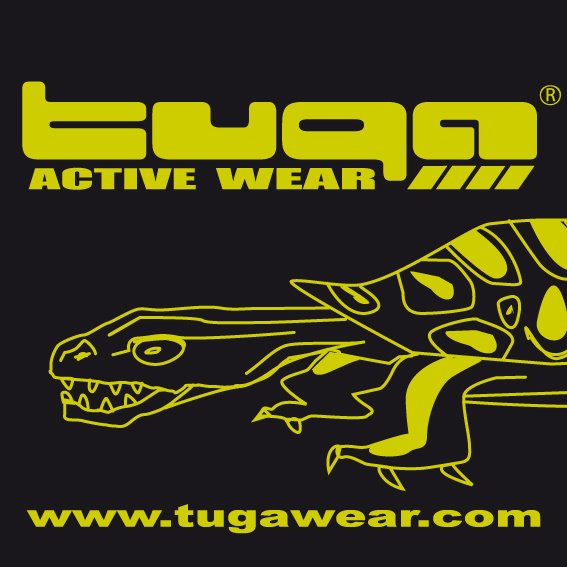 The 2019 Montcalm Challenge is coming!!!

In 2013, we had the chance to collaborate for the first time with the Montcalm Marathon.

It was our first event in France, completely new to us, we were a little scared but finally everything went perfectly well. The shirts were successful and we became two additional volunteers.

Now we are beginning to prepare a new edition. For us, going back to Auzat means meeting each year people we met 7 years ago. We participate in the organization, we give a hand if needed and we try to climb to the Pica d'Estats, roof of Catalonia, with all the Montcalm Challenge team to eat, sleep, drink ... and to be in the end for two days additional volunteers.

That's why we try to make the best T-shirt, with a modern design, and contribute every year to make the Montcalm Challenge grow and increase its quality.

It must also be said that thanks to the Montcalm Challenge, we are a little better known in France.

So, thanks for all these years and we expect many more to come. 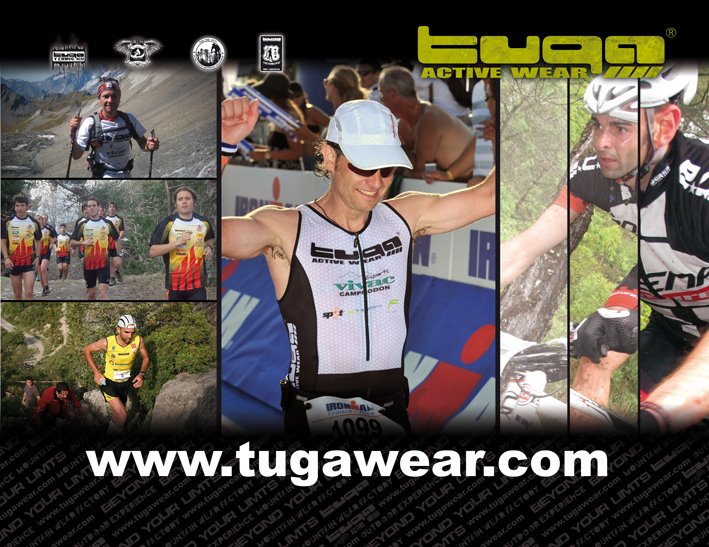 catalyst of talents in the heart of the Ariège Pyrenees !

I grew up at the foot of the Montcalm, in L’Artigue, and I have always been fascinated by the beauty of the landscapes and the courage and strength of the women and men of our valley! So, I decided to combine the strengths of the Montcalm with my job as a professional business coach: I organize individual and collective coaching sessions, business seminars, in this soothing and stimulating environment, to better manage your stress, your objectives, boost your mind and strengthen team cohesion. 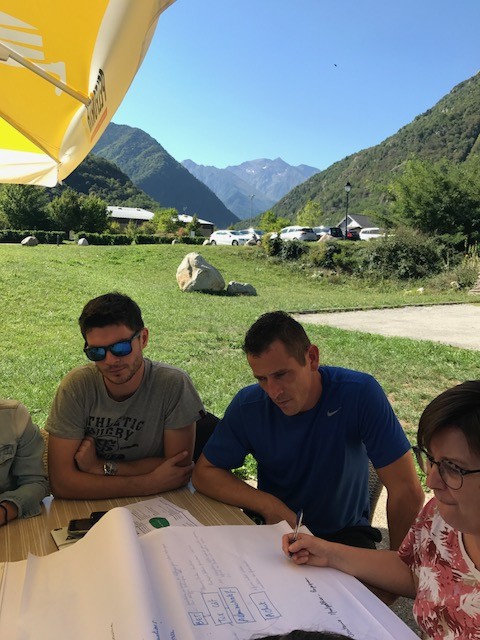 Trailers, rugby players, basketball players and team sports clubs are now using our services to consolidate their strengths and push their limits, while increasing their physical potential. 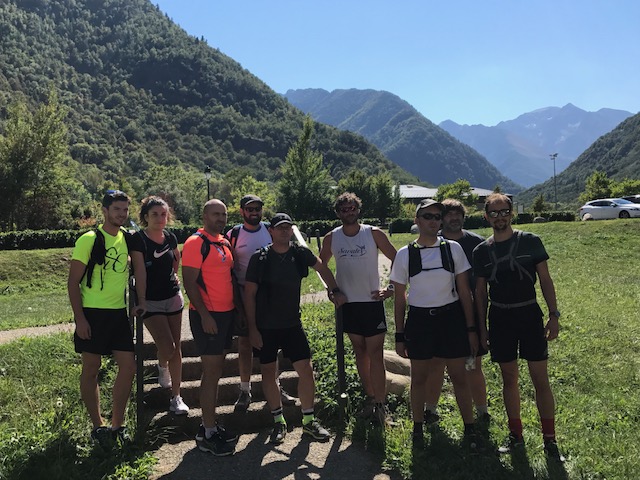 The PEPIT.ES team is at your disposal to organize preparatory stays, and we will be present as volunteers on Montcalm and PICaPICA races to accompany you in your sporting feat!

> link to the sports page: 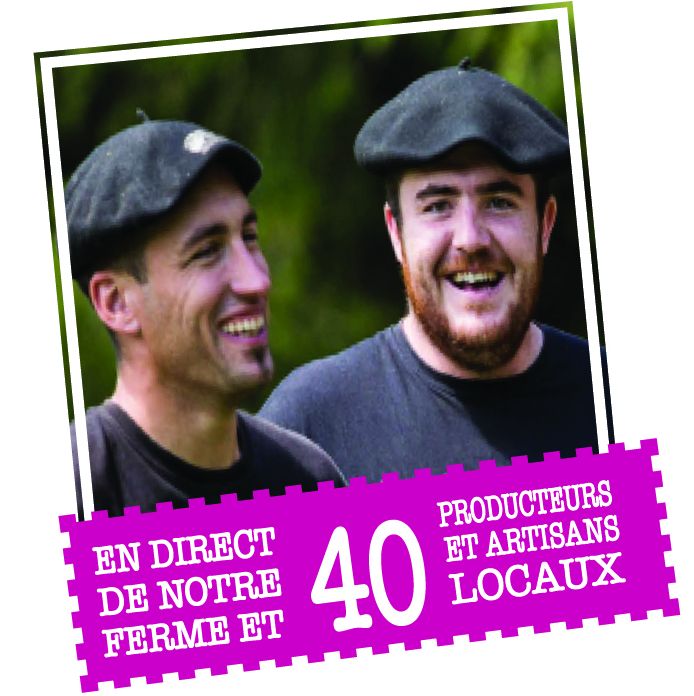 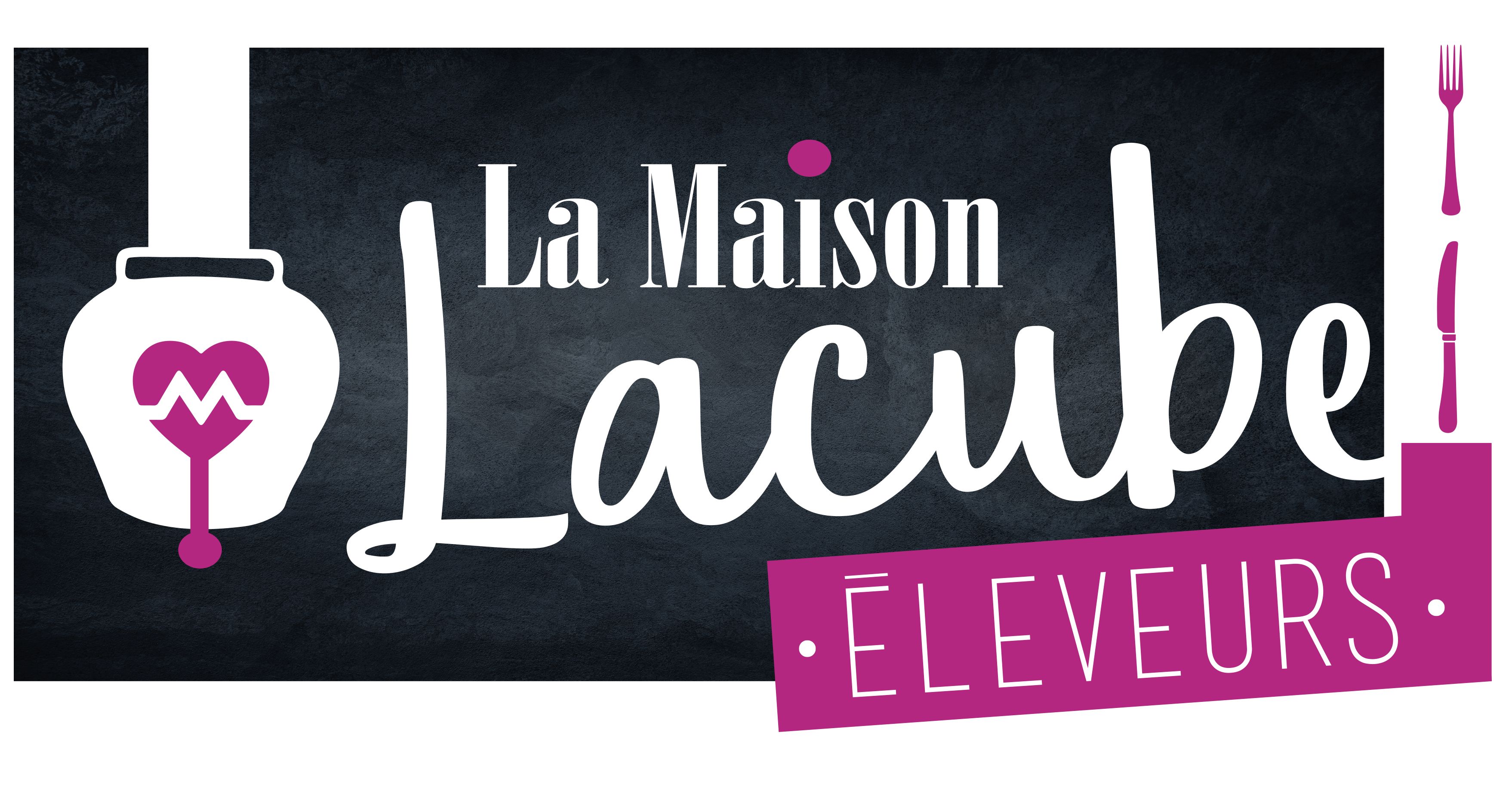 An experience in Ariège !

We have created in our village in Ariège a restaurant-shop of local products with a dual purpose: promote taste and heritage, to show how our good mountain products are the fruit of this exceptional territory. Welcome to the embassy of our gourmet products from Ariège!

We are Gascony cow farmers and we welcome you in our family home at the foot of the “Plateau de Beille” in Ariège, in the heart of the Pyrenees.

Being independent in our production choices, living with dignity from our work, it was our bet as young farmers: we naturally moved to the direct sale of our products (mountain meat, fat duck, Gascon black pig) and to the agricultural tourism: educational walks, restaurant-inn... 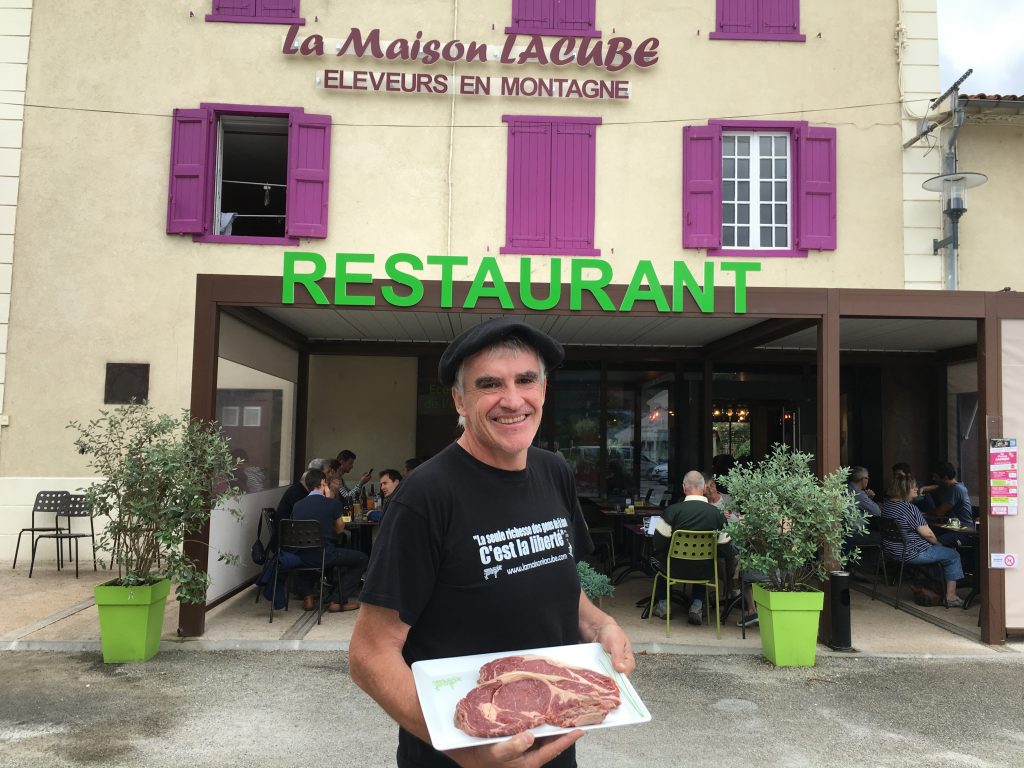 Our development choices meet more and more the expectations of today's "consumers" who want also to be “actors”: eating at the Lacube House, bringing back home our good meat or one of our burgers means becoming aware of the riches of our region, supporting a sustainable mode of agricultural production and promoting the local economy.

And it's amazing how this sharing can generate a close link, taste and pleasure !

By discovering these places, tasting these simple and true flavors, you will come to meet our history.

So contemporary, full of life, future and meaning. 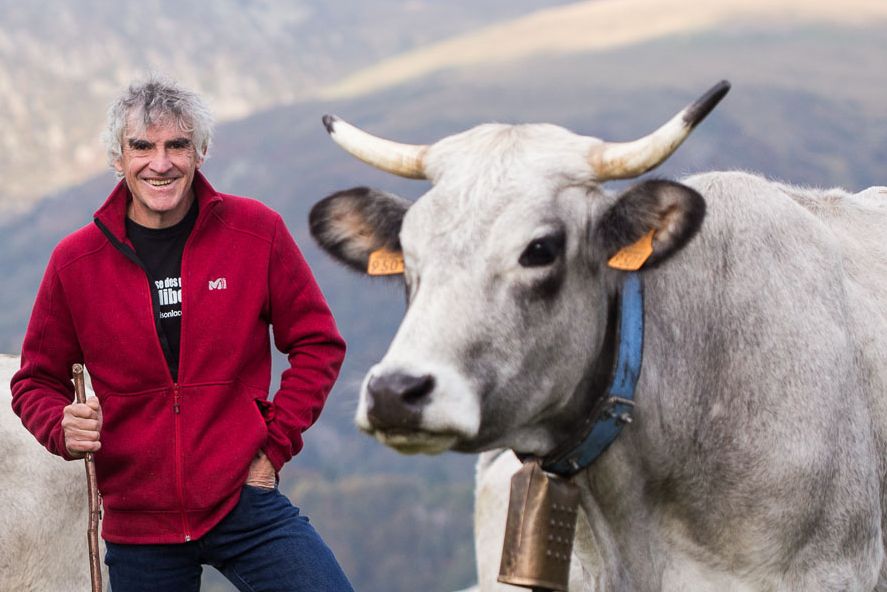 The Montcalm Challenge races as seen by the trailrunner Philippe LACUBE

The Montcalm (3077m) for all the people living in Ariège is an iconic peak: it is the roof of the ARIEGE with the “Pique d'Estats”, which is on the border with Spain. The Montcalm Marathon, which has passed through these two summits for 29 editions, is mythic.

I have always roamed the mountain but I really began the practice of trail in 2016. I participated in the Sarrasi Vertical Kilometer in 2017 and last year I registered for the first time for the Montcalm Marathon. I did not think I would be able to make it because I know what this event represents but I prepared very well which allowed me to have the resources to do it well. It was an exceptional experience and I ranked 59th in 6h and 14min.

In 2019, I will be again at the start of the Montcalm Marathon or of the PICaPICA if I can prepare myself well enough to finish this race because I already know three quarters of the course and therefore its extreme difficulty.

The Lacube House will give us the privilege of holding a food and refreshment center where you can enjoy their many specialties.

a desire for performance.

For all practical information concerning your activities and accommodation,

Discover the rankings and results,